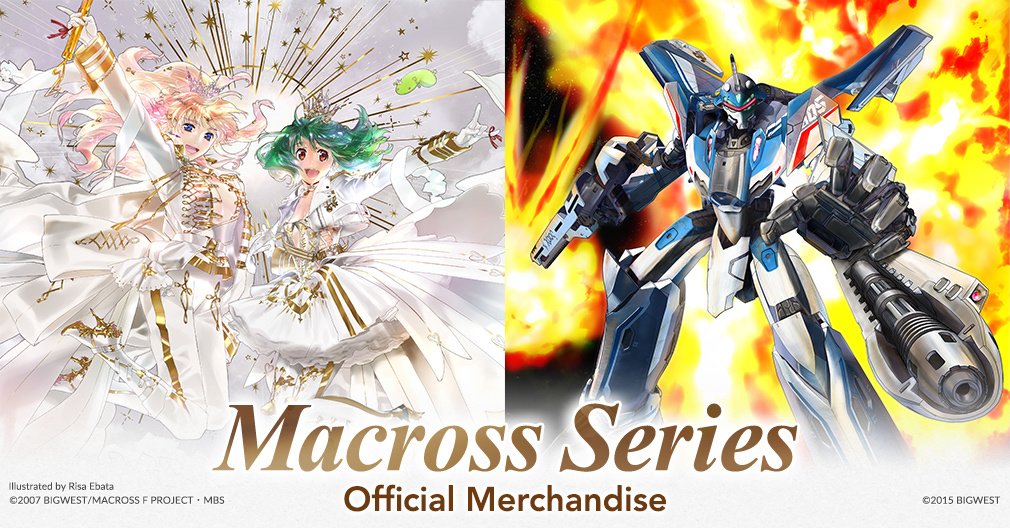 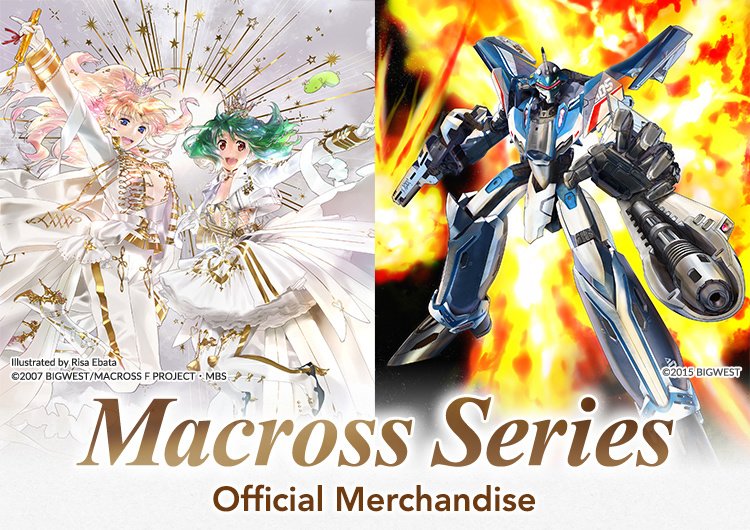 A.D. 2059.
The Super Long-Range Emigration Fleet, "Macross Frontier," continues upon its voyage towards the center of the galaxy. Composed of vessels equipped to artificially sustain environments similar to those of Earth, the fleet serves as home to more than ten million people… 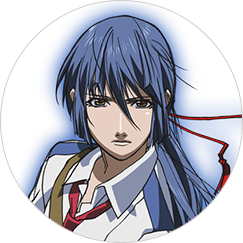 A high schooler enrolled in Mihoshi Academy’s pilot training course.
Born into the prestigious Saotome Kabuki troupe. He has somewhat feminine features that often cause him to be mistaken for a beautiful girl. His true passion is for the sky, and that leads him to train as a Valkyrie pilot, which drives a wedge between him and his father. Usually rebellious and sarcastic, he feels stifled living cooped up aboard the Macross Frontier. However, when the Vajra attack, he finds himself getting into the VF-25, the latest variable fighter. 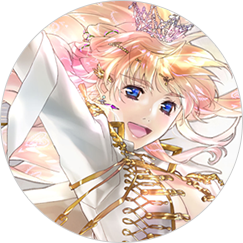 The Macross Galaxy fleet's top singer, known as “The Galactic Fairy," and a consistent chart-topper on the Galaxy Network music charts. She is candid about her beauty and exceptional singing prowess on the surface, but at her core, her unyielding dedication makes her a true professional. While on the final stop of her galaxy-wide tour aboard the Macross Frontier, she meets both Alto and Ranka. 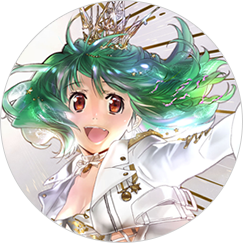 The cheerful and naive little sister of S.M.S. ace pilot Ozma Lee. She works part-time at the Chinese restaurant, “Nyan-Nyan.” This self-professed Sheryl fan dreams of becoming a singer herself, and with Alto's encouragement her road to stardom begins. Having lost her memory, she is unable to remember anything from her childhood except for a single song, called “Aimo.” 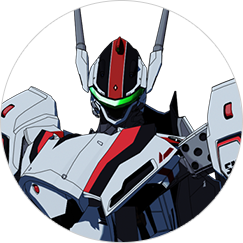 A variable fighter being tested in 2059 by the private military company S.M.S. as an alternative to the mass produced VF-171. With its new EX-Gear cockpit interface system, it is capable of performing maneuvers that exceed the pilot's own g-force limitations. The F-type, piloted by Alto Saotome, is an aircraft with enhanced offensive capabilities. 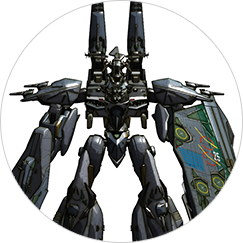 A Macross Quarter-class Transformable Assault Space Carrier and flagship of the private military company S.M.S. At 402 meters, it is one-fourth the size of the largest Macross battle-class ship which measures 1,600 meters, but thanks to its size it is highly maneuverable.

A.D. 2067.
A strange disease called Vár Syndrome that causes a sudden shift in its host's psyche, inciting violent behavior, is ravaging a remote corner of the galaxy. As a countermeasure, the Tactical Sound Unit, Walküre, was formed. Their songs are used to combat the disease by performing live throughout space, which helps to suppress the symptoms of Vár Syndrome. In tandem with these outbreaks, a variable fighter squadron from the "Kingdom of the Wind," known as the “Aerial Knights,” suddenly appears on the scene and makes their presence known. The scene is set for a tale involving the mysterious legacy of the Protoculture, intertwined with passionate teamwork, and love that transcends star systems. 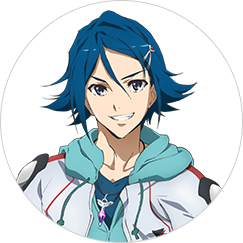 Age: 17 / DOB: September 21 / Height: 169cm
A youngster that tells it like it is and shoots from the hip. Unaware of his natural sense of rhythm, he wanders aimlessly through the galaxy, never able to find a concrete goal or dream of his own. The pendant that hangs from his neck is a keepsake from his father. Allergic to cats. 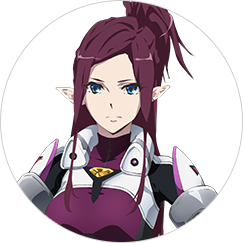 Age: 18 / DOB: February 11 / Height: 164.5cm
The sole female member of Delta Flight. While she takes great pride in her duties as a pilot, she also has a serious and rigid side. Perhaps due to that part of her personality, she is inept at romance. While working as a pilot for the NEW U. N. SPACY, she was scouted by Captain Arad and joined Xaos. 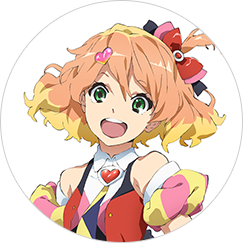 Age: 14 / DOB: November 3 / Height: 154 cm
From the outskirts of the galaxy comes a wide-eyed country girl in pursuit of her dreams to join the Tactical Sound Unit Walküre. She loves her hometown's famous apples, saying "Gori-Gori" a lot, and singing. However, she's not a fan of galactic mackerel. 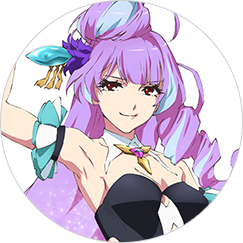 DOB: August 17 / Height: 165 cm
The lead vocalist of the Tactical Sound Unit Walküre, both her background and private life are completely shrouded in mystery. Her singing voice, which has a calming effect against the Vár Syndrome, is Xaos' ace in the hole. 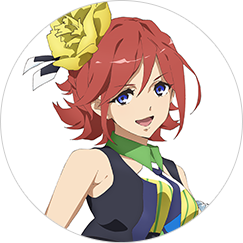 Age: 22 / DOB: June 8 / Height: 168 cm
The leader of the Tactical Sound Unit Walküre is the responsible big sister type who excels at management and handles everything from staging operations to debriefings. She made her debut as a solo idol singer prior to joining the group. 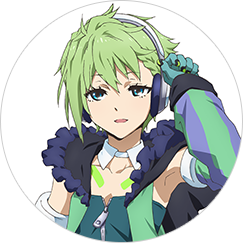 Age: 15 / DOB: July 23 / Height: 147 cm
An established member of the Tactical Sound Unit Walküre. She may not be much for conversation, seldom showing her emotions, but is a master hacker and manipulator of electronic systems. Fellow Walküre member Makina is her bosom buddy. 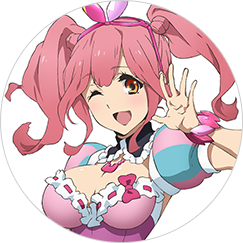 Age: 18 / DOB: April 19 / Height: 159 cm
The spirited, bubbly member and mechanic of the Tactical Sound Unit Walküre, who absolutely adores mecha, going so far as to name her favorite ones. She has an inseparable bond with roommate and Walküre member Reina. 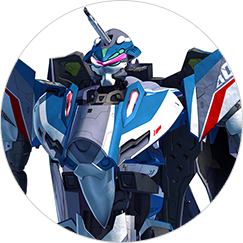 A forward-swept wing variable fighter used by Delta Flight to carry out joint operations with the Tactical Sound Unit Walküre. In order to provide additional support to Walküre, it is outfitted with multi-drone plates. The J-type, piloted by Hayate Immelman, is equipped with the latest advancements among the Siegfried series. 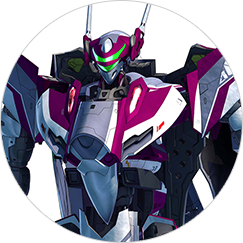 A forward-swept wing variable fighter used by Delta Flight to carry out joint operations with the Tactical Sound Unit Walküre. In order to provide additional support to Walküre, it is outfited with multi-drone plates. The C-type, piloted by Mirage Farina Jenius, has the same enhanced communication system as the commander’s S-type. 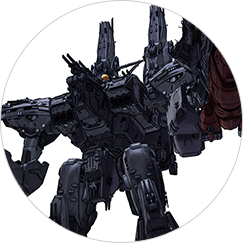 A Macross-class battleship that serves as the base of the Xaos Ragna Branch that both Walküre and Delta Flight are assigned to. Like the SDF-1 Macross, it can transform from its "Fortress" cruiser mode, to a humanoid “Attack Mode.” Both arms of its Attack Mode are connected to VF carrier warships, with its portside limb being Delta Flight’s base of operations, the Æther.

Learn more
Back to top